The French Quarter is the oldest and most famous area of New Orleans. It is famous for its French architecture and deep, rich history. It has also become well-known for its festivities and carousing.

The French Quarter, or "Quarter" for short, is located just to the northeast of Downtown New Orleans, right alongside the Mississippi River. The majority of the Quarter is contained within three major streets and the river. These streets are Canal Street on the southwestern side, Rampart Street on the northwestern side, and Esplanade Avenue on the northeastern side. The river borders the quarter on the southeastern side.

Most people visiting the French Quarter approach on Interstate 10 from either the east or the west, and then take exit 235B, 235A, or 236A to get on one of several streets that head into the Quarter. If possible, locate a parking area near the edges of the Quarter, but still within it, and walk into the interior, rather than drive into the interior itself. There are a lot of tourists walking around the area and driving into the interior could result in numerous delays.

Safety is always advised when getting to and from the area. Be sure to know your route beforehand, and try to get to your parking area and then your destination within the Quarter during the daytime if possible. New Orleans is a beautiful and unique city, but also has its share of violence like many other large cities.

Facts about the French Quarter

There are plenty of things to do in New Orleans outside of the Quarter, too. You can ride a street trolley from the French Quarter all the way down St. Charles Avenue, where beautiful mansions from the 19th and early 20th centuries line various portions of the trip. Extreme caution should be taken when getting on and off the trolleys. It is highly recommended to disembark only at well-lit and well-traveled stops where many other people are present.

Another great attraction is the National War Museum (formerly the National D-Day Museum), located about two miles south of the Quarter. The museum has an incredible collection of World War 2 memorabilia and artifacts, from both the European and Pacific theaters.

Swamp tours can be taken a little further outside of the city. The tours can be purchased at various shops within and near the Quarter.

There are so many things to see and do here that it would be impossible to list them all. We'll try to identify as many as possible.

Jackson Square - Jackson Square is an iconic square in the French Quarter. The ghostly looking St Louis Cathedral looms large behind the square, and the small streets around the square are filled with artists and performers.

French Market - The French Market is a famous marketplace located near the northeastern side of the quarter. It is filled with vendors that sell an incredible variety of knick-knacks, foods, trinkets, clothes and more.

The French Market is essentially split into two sides. The side on the southwestern end is the main entrance. Shops and vendors on this side sell food and drinks. The vendors on the other side sell merchandise, such as clothes, cds. One of our favorite things to do is when visiting, is to grab a stick of alligator meat or piece of Cajun corn before heading towards the retail side to do some shopping. This is a great place to grab some sunglasses if you lost, forgot or broke yours somewhere along the way!

Cafe Maspero - Cafe Maspero is a famous New Orleans cafe and restaurant that is about two blocks from Jackson Square. They serve amazing po'boys, soups and breakfasts.

Haunted Ghost Tours - There are a number of ghost tours you can take while visiting The Big Easy. One such tour is called the Ghost, Voodoo & Vampire Walking Tour. They'll take you to some frightfully interesting places, such as the Old Ursaline Convent, where the windows on the third floor remain mysteriously sealed.

Pat O'Briens - Pat O'Briens is a well-known bar where dueling pianos play nightly and where amusement and revelry can always be found. It has been in the Quarter since 1933, and has a beautiful courtyard with an even more "interesting" fountain.

Bourbon Street - Bourbon Street is the "heart" of the French Quarter. It runs across the quarter from the southwest side to the northeast side. A large portion of New Orleans' nightly merriment occurs on this street, and many pubs and bars line the sides of the street. The entrance to Pat O'Briens' Courtyard is on this street as well.

Mardi Gras Festival and Parade - New Orleans hosts one of the most famous Mardi Gras celebrations in the world. Most of the parade takes place outside the Quarter, but the parade does run adjacent to the Quarter along Canal Street for a few blocks. Mardi Gras festivities, including the main parade, occur in the Quarter in the days leading up to Fat Tuesday, the Tuesday directly before Ash Wednesday.

Audubon Aquarium and Insectarium - While these facilities aren't technically part of the French Quarter, they are located right next to it on the northern side of Canal Street. They are absolutely a must see, especially if you are traveling with children.

Harrah's Casino - Whether or not you are interested in gambling, Harrah's Casino is a great stop while visiting the city. It is beautifully decorated in New Orleans style. Smoking is no longer allowed inside casinos, which may make it easier for those with breathing sensitivities or allergies to visit.

New Orleans was first claimed in 1682 by a French explorer by the name of Robert Cavelier. French traders settled the area over the next few decades, and in 1718 the city was founded by the governor of Louisiana at the time, Jean-Baptiste Le Moyne de Bienville. The city was called "Nouvelle-Orleans" in French.

The location of the original town was important to the French for its trade advantages. It was set directly between the Mississippi River and Lake Ponchartrain, a large inlet that connects to the Gulf of Mexico. The town was built on higher ground on this small strip of land, in and attempt to stem flooding from the two bodies of water.

In 1722, New Orleans replaced Biloxi as the capital of French Louisiana. The original streets were built in a grid-like manner. Ditches were built next to each road to help with water drainage, and a dirt wall was built around the streets. This area would later become known as the French Quarter.

In 1762, the Louisiana territory was given to Spain by King Louis XV as a result of the French and Indian War, in a secret agreement called the Treaty of Fontainebleau. The next few decades were tumultuous for New Orleans. The French settlers were resistant to Spanish rule, and at one point revolted and took control of the city. In 1788, a fire broke out in the Quarter and burned a lot of it down. As many of the buildings were rebuilt, they incorporated both Spanish and French elements.

Spain would hold the territory for forty years until 1802, when Napoleon Bonaparte of France signed another treaty with the Spanish to retake control. One year later, France sold the Louisiana Territory to the United States in a historic transaction called the Louisiana Purchase.

New Orleans would continue to grow and expand over the next two centuries. Many suburbs were built around the original Quarter and skyscrapers were built just to the west of the original settlement. The Quarter retained its old world charm, though, and today exhibits both Spanish and French influences in its architecture and culture. 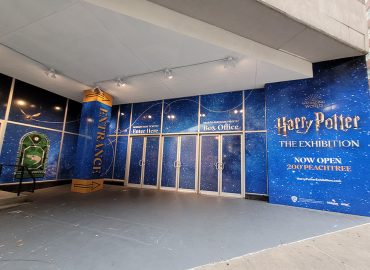 On my recent road trip around much of the southeastern United States, I was particularly excited to visit the Harry Potter Exhibition. Lucky for me, the exhibition had only recently moved from Philadelphia to Atlanta in October, just a few weeks before the time frame... END_OF_DOCUMENT_TOKEN_TO_BE_REPLACED 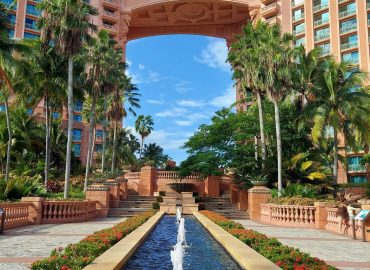 If you are planning or have been on a cruise, then you are probably aware that one of the major stops for many Caribbean cruises is Nassau in the Bahamas. We were fortunate enough to go on another cruise that stopped in the Bahamas on... END_OF_DOCUMENT_TOKEN_TO_BE_REPLACED